The three routes below ranked from easy to difficult, the Mt Hollywood Trail, the Brush Canyon Trail, and the Cahuenga Peak Trail, offer choices for intrepid seekers, stragglers, dreamers, beginners, children, and the moderately well-conditioned.

Stunning views of the Hollywood Sign unfold at your own pace on hiking trails that meander through the rolling chaparral of the Santa Monica Mountains. Trails originally blazed by paws, hooves, and yucca-thatched moccasins now connect us to cultural as well as natural wonders. The western frontier of Griffith Park offers hikers amazingly close encounters with the Sign, which is off-limits to human hands, just below the ridge line at the 1,708-foot summit of Mt. Lee.

Authorized hiking trails are open the same hours as Griffith Park, from Sunrise to Sunset, 365 days a year.  While enjoying hiking, please stay on authorized trails.Please beware of the extreme fire danger on the trails, parts of which are still recovering after a devastating wildfire in 2007. Trespassing is illegal. A LAPD officer is stationed near the Sign, which is protected by a fence and security cameras 24/7. 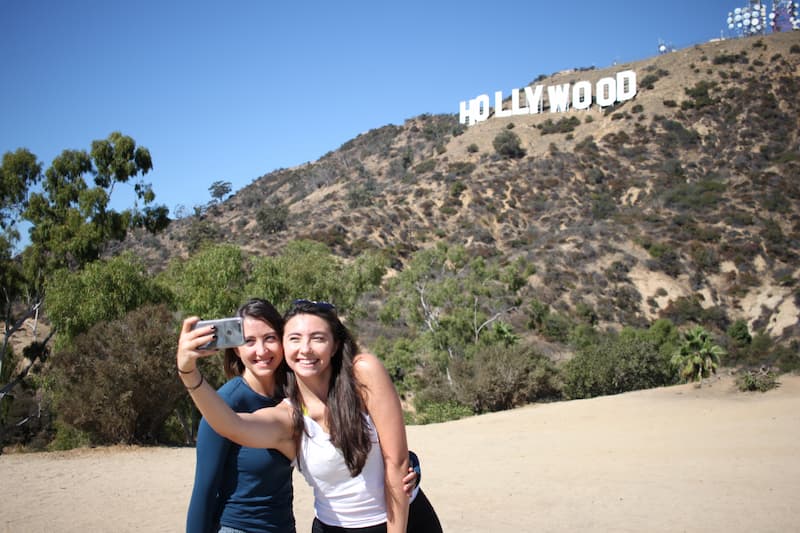 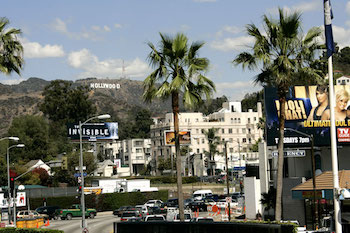 View of the Hollywood Sign from Hollywood and Highland 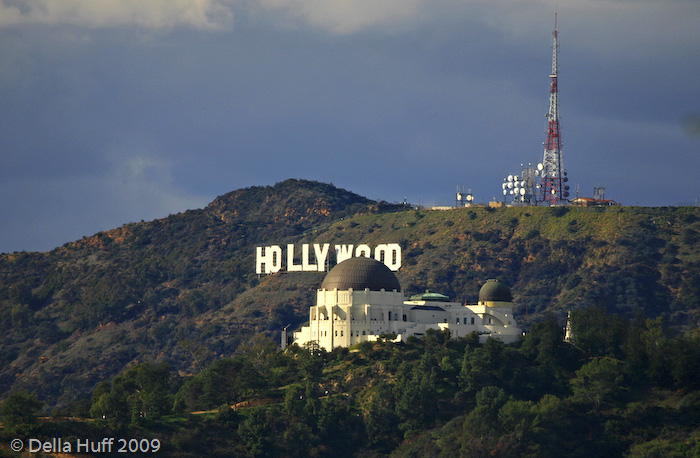 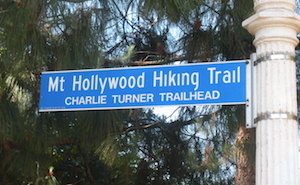 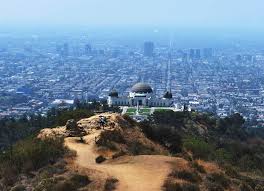 The entrance to Dante’s View
The Mt. Hollywood Trail, offering a mind-bending side-angle view of the Sign, has two starting points in Griffith Park, the 6.5 square miles of protected wilderness AKA the heart and lungs of Los Angeles (Phone: (323) 913-4688; Hours: Sunrise – Sunset). The shorter loop hike of about three miles starts at Griffith Observatory’s parking lot, which is free and fills up early on weekends. A slightly longer and steeper trail with fewer people starts on a fire road intersecting N. Vermont Canyon Rd., just past the Greek Theater, where hardy hikers find plenty of street parking.

The most popular route up Mt. Hollywood, the second highest peak in the park, is suitable for families with children. It begins at the Charlie Turner Trailhead, named to honor a longtime park volunteer. You can use the restrooms at the Observatory and ask a park ranger about conditions on the trail. Summer can be scorching up there, so be sure and carry plenty of water. Sandals and flip-flops are not the best footwear in snake country. The trailhead sign and landscaping are at the north end of the Observatory parking lot. The hike begins with a short, easy ascent along a ridge.

Look for the Mt. Hollywood trailhead sign and landscaping at the north end of the Observatory parking lot. The hike (where leashed dogs are legal but unleashed ones common) isn’t likely to cross paths with P-22, the mountain lion that traversed two freeways to take up residence in the wilds of Griffith Park in 2012. Start walking up a short, easy ascent along a ridge through authentic wild chaparral where you may spot purple and orange wildflowers in the spring and red Toyon berries on California Holly bushes in the fall. In less than a half- mile, you come upon a cooling grove of pine trees called the Berlin Forest, planted by real Berliners to honor their sister-city status with Los Angeles. There are tables and benches, and a beautiful view of the Hollywood Sign framed by pine boughs. Be on the lookout year-round for Zorro-masked Mountain Chickadees in the conifers and orange and yellow flame-headed Western Tanagers in the scrub.

After another gently up-sloped half-mile, you reach a four-way crossroads. The left fork goes around the west side of Mt. Hollywood toward a rest stop called Captain’s Roost. The right fork leads around the east side to a well-kept “folk” garden called Dante’s View. The Friends of Griffith Park have recently been planting and nurturing more native plants around the rest stop gardens, which were severely burned in 2007. Both provide shade (there’s also a water fountain at Dante’s View) and restorative views of the Observatory and the city to the south and the Hollywood Sign to the west. The 1,625-foot Mt. Hollywood summit is about one-quarter mile beyond both stops and consists of a coastal sage scrubby knob with protective railing. The slightly cockeyed view of the letters in the Hollywood Sign is from a perspective just a few degrees off dead center, and almost directly at eye level.
Learn More 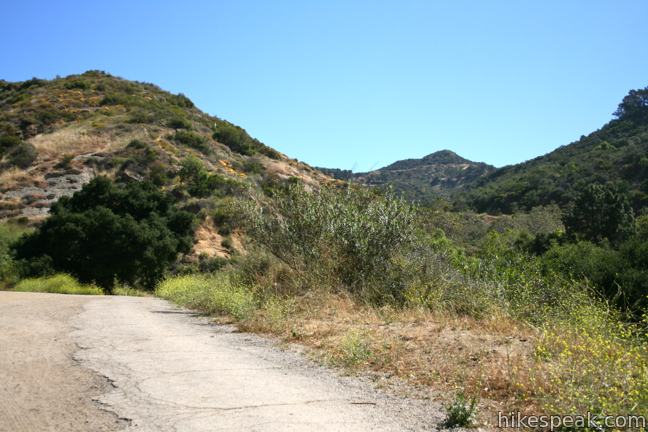 A view from the Brush Canyon Trail.
NOTE: Reservations are NOT currently required on this hike, however, access might be close3d off during the day depending on overcrowding.

The Brush Canyon Trail, also part of Griffith Park, features a fun side trip to Adam West’s Bat Cave, home of the Batmobile in the 60’s Batman TV series. Locals know it as Bronson Caves, and there’s a small parking lot close to the trailhead on Canyon Drive and an overflow dirt parking lot just down the road. The trail offers sensational views of the city and ends behind the Hollywood Sign. The old rock quarry tunnel has figured in many movies, from 1925’s Riders of the Purple Sage to 2010’s Megashark vs. Crocosaurus.

The 6.5-mile trail to the Sign climbs more than a thousand feet through several healthy ecosystems, so hikers need to give it three hours and carry plenty of water. If there aren’t too many unleashed dogs, you might see mule deer, bobcats, coyotes, and rattlesnakes. Look up for Cooper’s Hawks soaring in the thermals over the Sign and down for honeybees probing the wildflowers.
Learn More 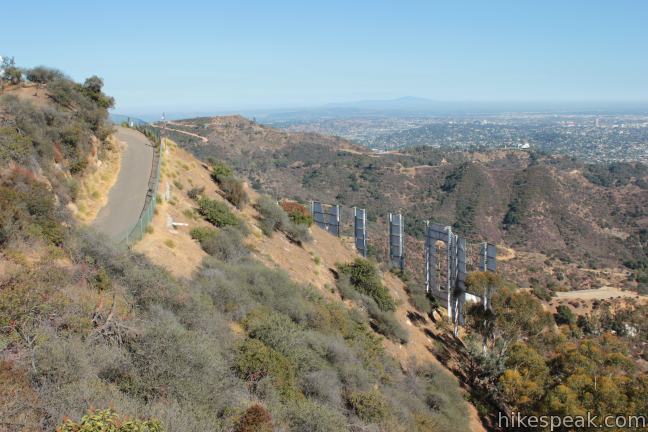 A view of the sign from the Cahuenga Peak Trail
The Cahuenga Peak Hike, across a short saddle from Mt. Lee, runs through the latest 138-acre addition to Griffith Park and offers wide angle views of the Hollywood Reservoir and the San Fernando Valley. Suitable for the more experienced hiker, it begins on the Aileen Getty Ridge Trail and includes the Hugh Hefner Overlook, both named for two of the many benefactors and community activists who raised the money to save the land from a luxury housing development in 2012.

The trail is more rugged and less defined than the Canyon Blvd. trail. It includes the famous Wisdom Tree and traverses an area where the park’s resident mountain lion, P-22, has been spotted (usually after dark when the park is closed). The trail is open from sunrise to sunset.
Learn More
Learn More