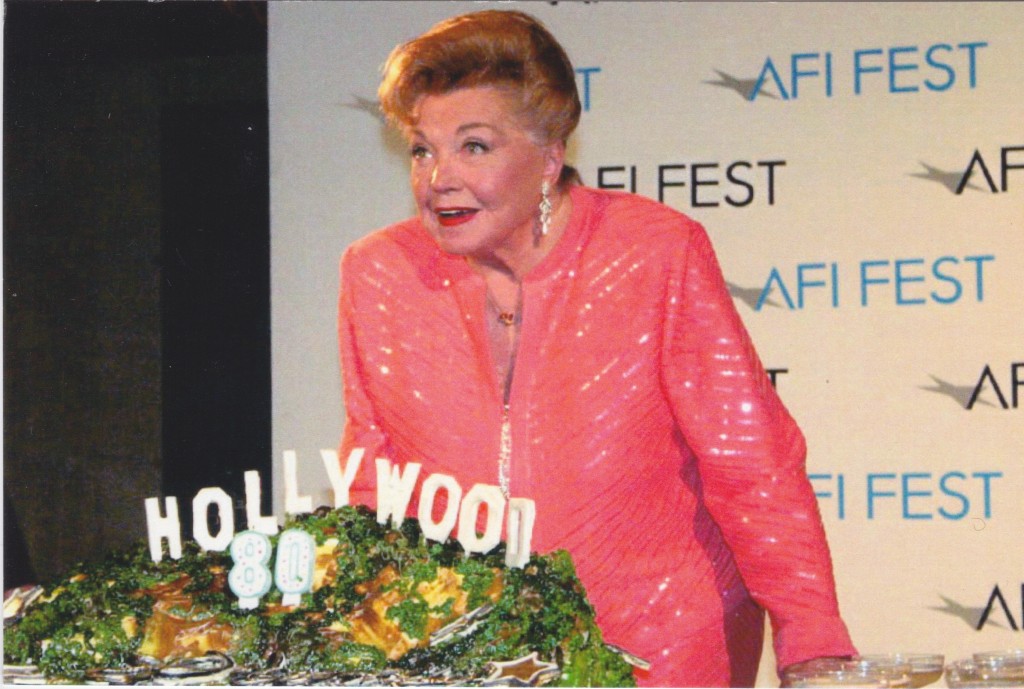 The Hollywood leading lady who cut the cake for the Hollywood Sign’s 80th anniversary, Esther Williams, has passed. Her long historic career helped create a new genre of movie – the swimming movie. From almost Olympic athlete (World War II stopped her from that) to Hollywood mega-star, Esther was a woman of many firsts: she was the first athlete to transition to star, at one time she was on the cover of 14 different magazines at once, and even helped popularize synchronized swimming. Her name can be found on pools, swimsuits, and up in lights and we are sad to say good-bye to such a wonderful woman.

Born in Inglewood, CA in 1921, Esther was the fifth and youngest child to Louis Stanton Williams and Bula Myrtle Williams. Esther feel in love with swimming. Her first job was counting towels at the local swimming pool to afford the 50 cent entrance fee. She took lessons from the male lifeguards who taught her what was then considered “male-only” strokes such as the butterfly, which she would later break records in.

Her medley team set the record for the 300-yard relay at the Los Angeles Athletic Club in 1939, and was also National AAU champion in the 100 meter freestyle, with a record-breaking time of 1 minute 09.0 seconds. By age 16, Williams had won three U.S. National championships in breaststroke and freestyle swimming. She was all set for the 1940′s Olympics in Helsinki, Finland until World War II broke out and cancelled the games. So instead of breaking records in the pool, Esther switched to breaking records at the box office.

A MGM executive contacted Williams about replacing Eleanor Holm in Billy Ross’s Aquacade Show. Legend goes that Billy Ross picked Esther himself out of 75 hopefuls. Her performing career had begun. Possessing the quintessential combination of glamour and athleticism, Esther Williams swam her way to stardom in such timeless motion pictures as “Bathing Beauty,” “Neptune’s Daughter,” and “Million Dollar Mermaid.” Throughout her illustrious film career, she swam more than 1250 miles in 25 aqua-musicals for MGM and continually proved that she was a champion in the pool and at the box office. A champion, an American dream, her name is synonymous with swimming. Her biography reads like a treatment for a film in which only someone like Esther Williams could star.

During the mid-40s, the MGM musicals were the most popular form of entertainment in the world. By the tail end of World War II, Williams was a pin-up favorite with returning Gl’s. Meanwhile, MGM’s publicity mill kept churning out headlines and photo opportunities – she once counted 14 magazines on a local newsstand featuring her picture on the cover. Esther Williams was America’s sweetheart for more than 18 years, appearing in 26 movies from the early 1940′s to the end of the 195Os, all but the last few for MGM. By 1953, the foreign press voted Esther the most popular actress in fifty countries. Along with international stardom, she must be credited for part of the U.S. boom in swim athletics and the sales of swimming pools and swimsuits.

Although she had a few dry-land roles in such films as “Take Me Out to the Ball Game,” it was the lavish water spectaculars that made her a top box-office draw and that became her cinematic trademark. Like ice skater Sonja Henie before her, Williams was one of the few female athletes to successfully cross over to widespread entertainment success. Her movie career played a major role in the promotion of competitive and synchronized swimming, which she is credited with popularizing. To millions of fledgling water ballerinas, she is the personification of synchronized swimming, a sport that reached world class status in the 1984 Los Angeles Olympic Games.

Esther Williams remains America’s favorite swimming star. Her fans continue to honor her work. Asked if she still swam, she laughed, “You know, I always get asked that,” and yes, she still swims – everyday. As Esther says, “It’s the only sport you can do from your first bath to your last without hurting yourself.”

For more information about Esther Williams or to view or purchase items in her swimwear collection, visit her website at www.esther-william.com